Exploring Science & Learning about Myself

My name is Gabriel Sheikh and I am currently four weeks into my Sci-High summer internship at Northwestern University’s George M. O’Brien Kidney Core Center (NUGoKIDNEY), and I can honestly say that I’ve loved every moment. It has been a very enjoyable experience since the first day; I have been learning numerous skills and concepts every day and have been able to exercise my learning through practical application.

Making the Leap into SciHigh

This amazing opportunity began when I was approached by my school principal earlier this year. I was initially intrigued by the premise of the program but was simultaneously discouraged due to a lack of self confidence. At that point, I had not taken any rigorous medical classes and was concerned that I would be unable to understand what would be going on around me. Along with that, I was unsure if I was completely interested in a career path in medicine or research. After a bit of deliberation, I decided that I wanted to pursue the summer program because I knew I could eventually translate the skills I learned into whichever STEM path I will eventually choose. Since I have an interest in engineering, I was hoping the program could introduce me to the world of research as a whole, and maybe even persuade me into pursuing medicine or biomedical engineering. I realized that this opportunity was one that I could not pass up, so I went through with the application process, and eventually saw myself entering the doors of the brand new Simpson Querrey Biomedical Research Center earlier this summer. 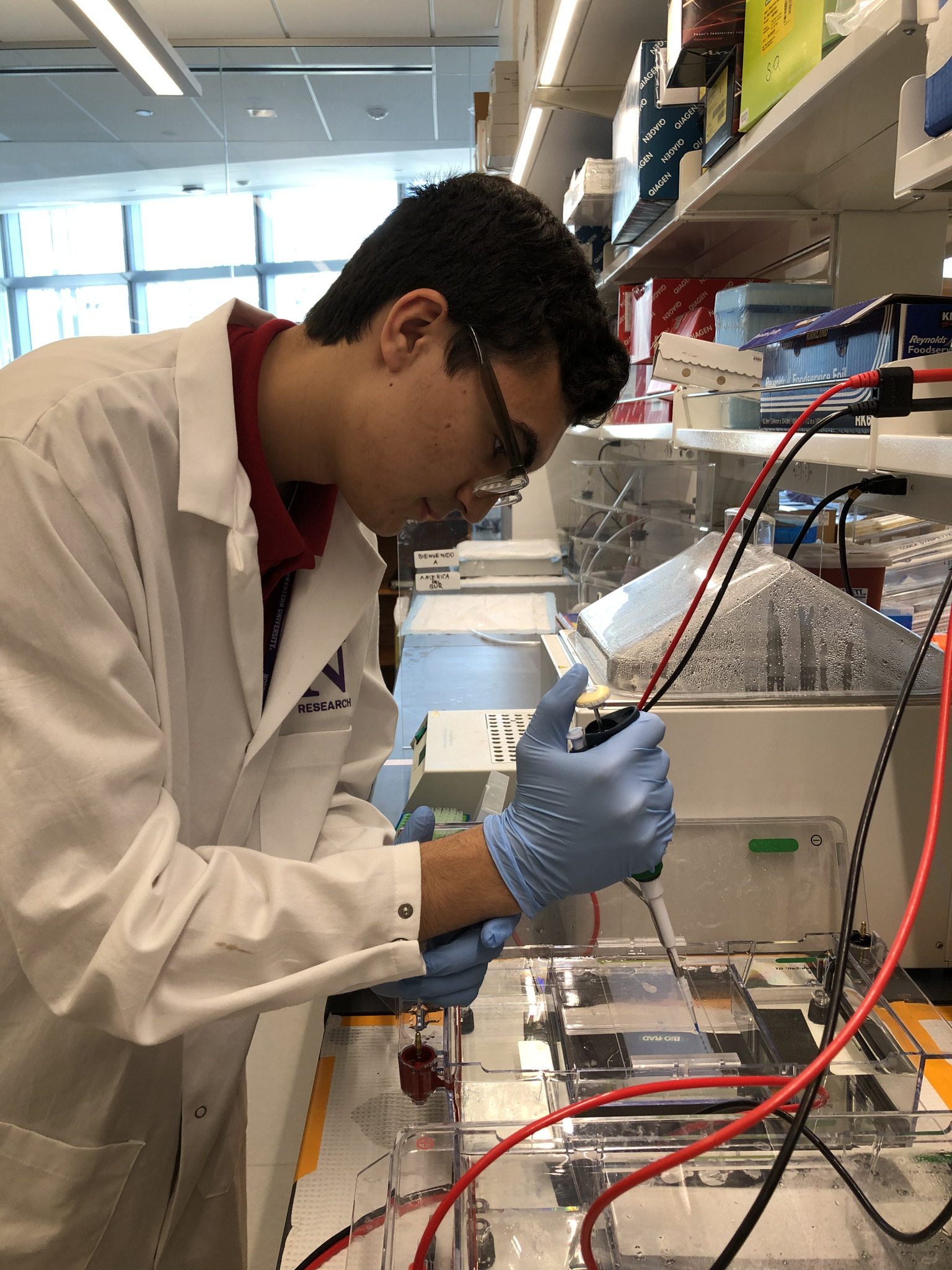 I was immediately fascinated by the seemingly new world around me. The building itself was extremely modern and high-tech. The labs were colorful, yet intimidating. I saw numerous scientists around me and had an overall sense of excitement wash over me. It was not long until I met my primary mentor, Susan Quaggin, MD, a world-famous nephrologist and researcher, and my other mentors. I became acquainted with a current medical student named Dorian, who was in charge of an exciting research project under Dr. Quaggin pertaining to diabetic kidney disease. The “Sweet Pee Experiment,” as it's its called, is a project concerned with examining the short term and long term effects of sodium-glucose cotransporter-2 (SGLT2) inhibitors-- a new class of diabetes medicine which serves to allow diabetics to excrete glucose through their urine. The existing medicine also appeared to have unexpected benefits for the health of the kidneys and hearts of those diabetics. Our research primarily focuses on understanding how these benefits arose from SGLT2 inhibitors. To do this, we will be using genetically altered mice who will be born without the SGLT2 protein that allows for the reabsorption of glucose. This will, consequently, allow the mice to excrete substantial amounts of glucose through their urine without needing to take medication. We will then study them to find the connection between these medicines and their beneficial effects on heart and kidney health  in hopes of minimizing the chance of diabetics contracting chronic kidney disease in the future. At the moment, we have simply been caring for and observing the “Sweet Pee” mice until we receive more materials and clearance we need. 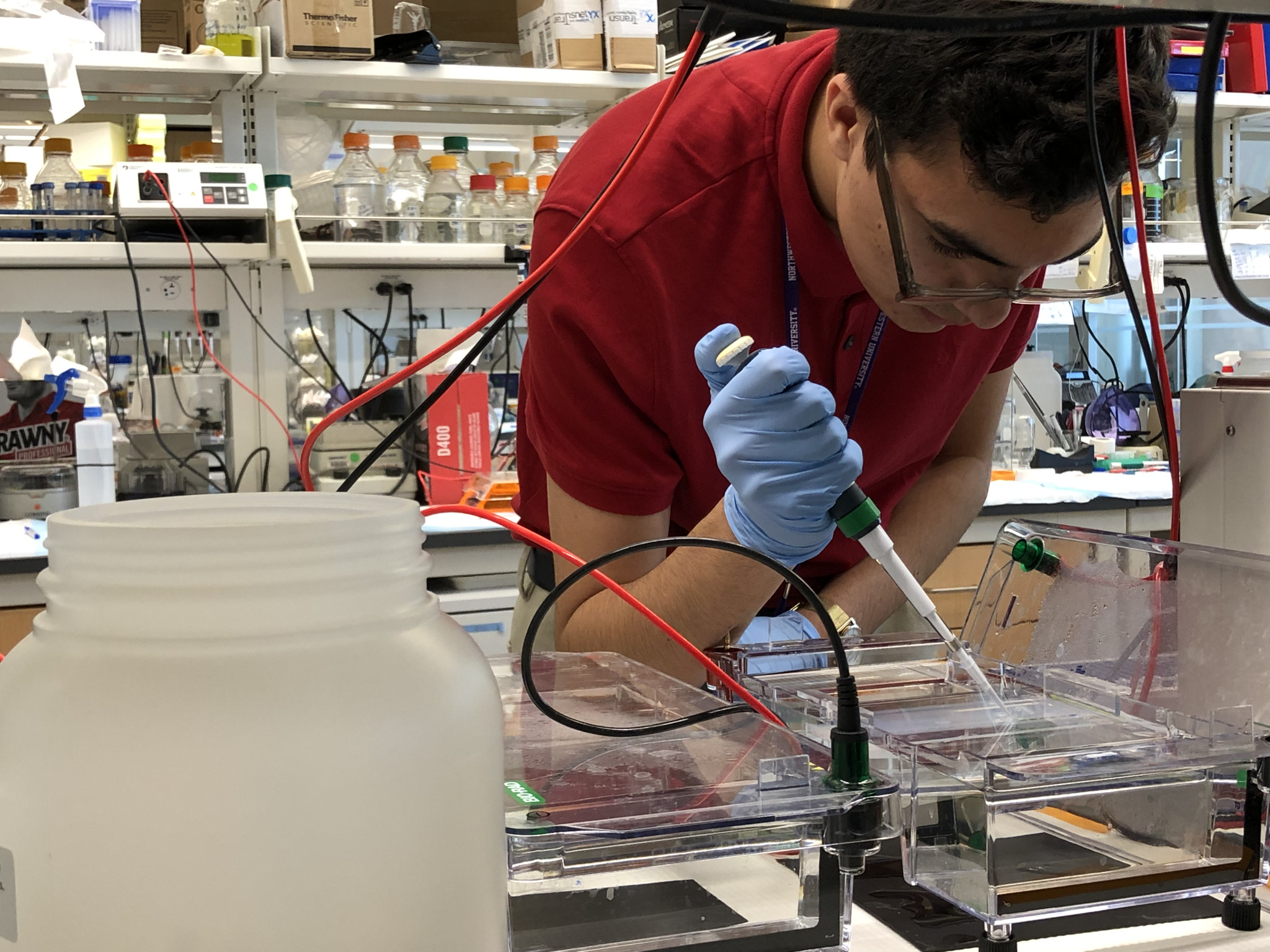 Throughout the last four weeks, I have learned numerous new skills that really sparked my curiosity. While shadowing other researchers, I have learned and helped genotype a few mice. This assay allows us to identify if certain genes of interest are present in the mice. The process includes clipping the ends of mice tails, addings a series of chemicals (alcohols, buffers, and primers) that will remove the hair on the mouse tail and ultimately isolate the particular gene sequence in the DNA, exponentially duplicating the gene of interest through a polymerase chain reaction (PCR) machine, creating an agarose gel, carefully pipetting the concentrated mouse DNA into wells in the gel, taking pictures of the gel using ultraviolet light, and analyzing the results. I will continue to assist in genotyping while also gaining the responsibility of assisting with metabolite isolation as Dorian’s research project continues.

Along the way, I have contributed even more to other research projects. One very unique project I have been working on has been with my other mentor, Ben. On the Northwestern Evanston campus, new imaging methods are being developed that will serve to help run analytics for those with glaucoma. Collaborators in Hao Zhang's lab are interested in optimizing a technique for ophthalmic imaging called "optical coherence tomography", also known as "OCT". This is a really common method used for diagnosis of retinal diseases such as age-related macular degeneration but has not yet been optimized in an extremely reliable way to look at glaucoma-related vascular structures in living patients. Currently, the only way to run these sophisticated tests require incisions in the eyes of living patients, which is a very unappealing process. The laser light source would be used for their scanning methods, eliminating the incision aspect while still achieving the same level of detail. One issue with the laser includes being unable to differentiate veins and capillaries from arteries in the eyes of people.

Ben has been asked to help solve this problem and I have also been contributing to this project, helping Ben tackle the issue using the  immunofluorescence microscopy technique. We began by extracting the eyeballs of mice and have added certain antibodies with fluorescent attributes (fluorophore groups) that will separately attach to veins and capillaries and will separately attached to arteries. After putting the flattened mice eyes under a confocal microscope that has filters for different regions on the light spectrum, we  were then able to differentiate the veins from the capillaries due to the different wavelengths of light the two have emitted. This allowed us to overlap the images and clearly highlight veins and capillaries in one color and arteries in another. We stained all of the blood vessels and highlighted them in red, and then stained alpha-Smooth muscle actin (aSMA) that is significantly more visible in the abundant smooth muscle cells of the arteries. Since the original pictures, we have been working on dissecting the eyes in other ways in order to get a clearer image, which does not cut the veins, capillaries, and arteries we are interested in near Schlemm’s Canal. Below are the initial images we took:

The Human Side of Science

When I joined the program, there were some assumptions I had that were later disproven and caught me by surprise. The largest surprise was when I discovered the personality of the lab and its constituents. I had assumed that most of the researchers would be very strict and constantly serious. I had assumed they would be hard on themselves and those around them in order to push for better results. This was not the case at all. As I looked around the lab, there are funny posters, stickers, figures, etc. Along with that, the researchers inject humor into their work and discuss current topics with each other. When it comes to their work, I found out that even when results did not meet prior expectations or some errors occurred, the researchers are not dissuaded. They report the error and continue their trials, or even start from the beginning. Though achieving satisfying results is the ultimate goal, there are many setbacks and obstacles that the researchers around me are able to adapt to and overcome. I found that resilience to be particularly inspiring.

Looking to the Future

Throughout my endeavors, I believe the skill that I most want to learn and develop would have to be a better understanding of proteins, antibodies, and human anatomy. Since both research projects focus so heavily on these aspects, I am hoping to do more individual research and ask more questions to build a more stable understanding. I am registered to take an anatomy and physiology course in the upcoming school year and I know that this experience will definitely help me in that class and beyond.

Along with this experience helping my future classes, some of my previous learning has also been helpful to me so far during my research experience. With the help of my biology and chemistry classes, I have been able to set a suitable foundation for understanding the basic principles upon which this advanced research relies. Though I would need plenty more advanced medical classes to fully grasp what the researchers are doing, it has been satisfying to comprehend most of their explanations because of what I had previously learned. My physics and calculus classes have also helpful in understanding some of the machinery that is being used. Since the machines relied on certain physics principles such as the Doppler effect or the behavior of light, I had an even clearer understanding as to what the machines were doing and how they were doing it. Another computer program used to analyze the echocardiograms used calculus in order to measure the volume of blood pushed by the heart. By obtaining the diameter of the pulmonary gland and the velocity of the blood flow, the system made a graph of this rate and used integrals to measure the volume of the blood that the heart was pumping out.

Overall, my budding interest for biomedical engineering and research as a whole is one that I would never have known about otherwise had I not been in the NUGoKidney SciHigh Program. I find my mentors to be very insightful, helpful, genuine, and motivating people who I am glad to have met. Synergizing with them in such a collaborative environment as part of this program is one major skill I am proud to have sharpened and one that I will continue to bring with me as I continue on my academic and professional career. I can whole-heartedly say that I have enhanced my confidence and excitement to pursue a career in the scientific field after participating in NUGoKidney’s Sci-High Summer Program.